Geographical skills: use world maps, atlases and globes to identify the United Kingdom and its countries, as well as the countries, continents and oceans studied at this age range. 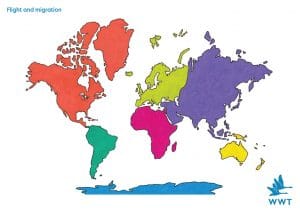 Either give learners their labelled WWT ‘Flight and migration’ visual from the WWT ‘Flight and migration’, Getting into activity, alternatively if you have not completed section b) of ‘Getting into’, learners should label the seven continents, on the visual, before continuing. When it gets cold, and there is less food for birds to eat, some birds leave one place and fly to live in another warmer place for a while, where there is plenty of food. This is called migration.

A swallow is the name of a bird (you could search for a photo of a swallow to show the learners, has anyone seen one?). Swallows live in Europe in the summer.

Can you point to Europe on your map? At the end of the summer in Europe, usually around September, swallows fly to Africa.

Can you point to Africa on your map? Check learners all point to the correct continents and then model drawing a line from Europe to Africa. Ask learners to draw the migration route on their own map and label it ‘swallows’. In springtime, swallows fly back to Europe, when it gets warmer again.

Now display the following list and ask learners to add the migration routes to their visuals. You may want to find pictures of these birds to display to help the learners understand. To aid learners with reading the continents, the continent names could be displayed in the colours on the map.

With the WWT ‘Flight and migration’ visual in front of them, or one displayed for all to see, use the following speaking frame to talk about the migration of the different birds. Learners can join you in pointing at the continents as you say them:

In summer when it’s warmer and there is plenty of food, swallows live in Europe. As it gets colder in Europe and starts to become winter, the swallows migrate to Africa where it is warmer.

Just do section A

Extend section A by getting out some atlases or globes. As well as the seven continents, there are five oceans. Some migrating birds have to fly over oceans.

Can you find them on the globe and label them correctly on your map? Support, guide and help learners use an atlas or globe, read the words and copy the names correctly onto their visual.

Fold a piece of card in half and draw the shape of half a swallow on one of the halves (each learner could do this or you could provide a template). Ask them to cut round it and unfold the card, revealing the shape of a whole swallow. If time and resources allow, you could mould a cylindrical shape from clay or plasticine around the card providing a 3D body and head and giving learners something a little easier to hold on to. Go outside, to an open area, and tell the story of the swallows migration. Learners should take their model swallows on a journey

e.g. It’s September, all the swallows are getting colder and keen to get somewhere warmer, so they start their journey to South Africa (all the learners fly around with their models). Suddenly they are hit by a huge storm and they sway and struggle to survive (encourage learners to ‘act this’). Unfortunately, their next obstacle is a large hawk, swooping and attacking (learners could fly in various directions to avoid the ‘hawk)’. As they arrive in Africa, they fly as a group (learners should follow this instruction). This is just an example, you can add any movements or stories along the way on the journey, perhaps even creating a PE lesson from the activity.