Getting into...
adaptations, evolution and inheritance

Science: identify how animals and plants are adapted to suit their environment in different ways and that adaptation may lead to evolution. 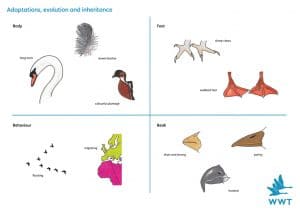 Give out copies of the WWT ‘Adaptations, evolution and inheritance’ visual so that each learner can see one. Remind learners that an adaptation is a feature or a behaviour which helps an animal to survive in its habitat e.g. a very thin beak for getting worms out of cracks in a rock or a particular bird call that helps them to find a mate and reproduce.

Now ask learners to imagine they are conservationists (people who protect nature and wildlife) who are exploring uninhabited islands to record what bird species live there so they can study and protect them. On the island, they find a new species of bird that has never been seen before. Challenge learners to do the following:

Ask learners to write a fact sheet about their bird, this should include its name, approximate size, its behaviours e.g. migration, call etc. As a group discuss what sorts of things might threaten their birds’ habitats and survival e.g. human activity (building on the island, cutting down the trees, pollution of the water supply, eating the fish that the bird eats etc.) and/or environmental changes (a year with more hurricanes than usual or perhaps less rain etc.). Ask learners what threats there might be to their bird and to add these to their factsheet. How can people help to protect their bird?

Just do section A

Extend section A: ask learners to make a short presentation to the class about their new discovery. They should describe the bird, it’s features and why it has these adaptations. Could any of these birds survive on the same island? Why/why not?

Take learners to a grassy area and explain that they are grass-eating birds. Also explain that there is not enough grass for them all: only those who eat the most grass will survive long enough to have offspring and continue the lifecycle. Using thumb and forefinger, demonstrate a pinching action. Get learners to copy you and explain that this will be their beak. When you blow your whistle, learners start picking grass with their thumb and forefinger only (they must hold their collected grass in their other hand). When you blow your whistle again, they have to line up according to how much grass they have collected.

Point out that the majority of ‘birds’ have not found enough food and so have died (ask them to sit down). The ‘birds’ with the most food (three learners) have survived and so now have baby birds (all the birds that have just ‘died’, now come back to life as baby birds and stand up ready to take part). Most of the babies will inherit the same beak shape as their parents (ask all learners to get their thumb and forefinger ready to collect grass again) BUT now and again a bird is born with a beak that is different. This could be called a mutation, or a 'change'. Choose one learner and explain that they have a bigger beak than all the others and can use all five fingers to collect grass.

Repeat the grass collection exercise. The bigger beaked bird should have lots more grass than everyone else, so will be one of the three who survive this time. Again, ask all but those three, to sit down. Now these three birds have babies.

What size beak will offspring of the big beaked bird have? (Most often, a big beak). Ask a third of the learners sitting down to stand back up but this time they may all use five fingers to collect grass.

What size beak will offspring of the two small beaked birds have? (Most often, small beaks). Ask the remaining two thirds of the learners sitting down to stand back up and continue to use the pinching action to collect grass. The process by which this beneficial trait (the big beak) spreads through a population, is called natural selection and over time this leads to evolution. The birds will evolve big beaks over time, because a bigger beak is an adaptation which helped them to survive.

After some in-depth work on adaptation from this Going deeper activity (and the KS2 WWT ‘Adaptations, evolution and inheritance’ Getting Into activity) this outdoor session should be a good introduction to learning that adaptation may lead to evolution e.g. the birds evolved big beaks through time, because bigger beaks was an adaptation which helped them to survive.