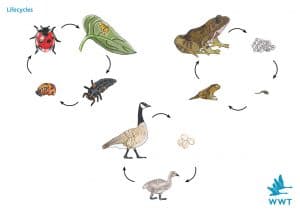 All animals have babies. Talk about the names of adult and baby animals. Use the following speaking frame ‘A baby cat is called a kitten. Kittens grow up into cats. Repeat with different animals (dog - puppy, chicken - chick, pig - piglet, sheep - lamb). You could find pictures online to show the class as you are talking about each animal.

Cut the lifecycle of a frog out from the WWT ‘Lifecycles’ visual and show the class. Frogs are born as eggs, also called ‘frog spawn’ (point to the frog spawn). When the eggs are ready, they turn into tadpoles (point to the tadpole). Tadpoles don’t look like frogs yet, they look like tiny fish, that swim around. Next the tadpole grows some legs and arms. Now it is called a froglet (point to the froglet).

Does the froglet look more like a tadpole or a frog? (a frog).

Which part still looks like a tadpole? (the tail). Finally, it will look like a frog as its tail disappears (point to the frog). Now this frog will lay eggs called frog spawn (point to the frog spawn) and it starts all over again. This is called the lifecycle of a frog.

Give each learner a cut out of the frog lifecycle from the WWT ‘Lifecycles’ visual and ask them to cut out each picture, so they end up with the 4 stages. They can now jumble them up and then stick them in a circle, in the correct order.

Can you add arrows back onto your lifecycle?

If laminated, the cut-out stages can be left out as an interactive activity for learners to consolidate their learning by remembering and completing the order of the lifecycle in their independent learning.

Extend section B by asking learners to label the lifecycle with ‘egg’, ‘tadpole’, ‘froglet’ and ‘frog’. Learners should attempt to write these words independently as they are mostly all phonetically spelt from phonics phase 2.

Photocopy the frog’s lifecycle and cut out each stage so there is enough to give one to every member of the class. Go outside and give one to each learner. To consolidate the new vocabulary (which will support the learners to get the most out their visit to WWT) call out a lifecycle stage e.g. frog spawn, tadpole, froglet or frog. Learners check if their picture matches the word you called and if so, they run to you. To consolidate the order of the lifecycle, challenge learners to get into groups and stand in a circle in the correct order (make sure to take a few extra pictures out with you in case it is not possible to make a full lifecycles with the number of learners you have).